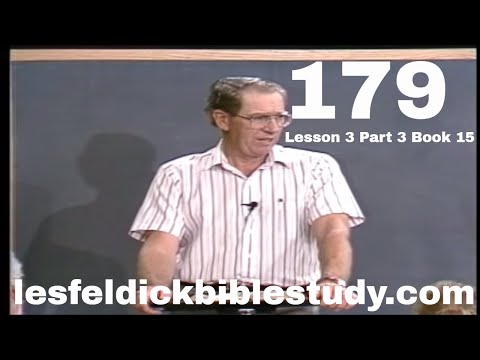 Through the Bible with Les Feldick

Let’s begin where we left off last lesson. We’ll start at Matthew Chapter 24 verse 15. When we came into this Chapter I told you that it was all Tribulation ground. Jesus is speaking prophetically to the Nation of Israel about the final seven years. And remember, He always addressed the Nation of Israel during His earthly ministry. We are already seeing some of these prophetic things starting to bloom. For example, we are seeing more earthquakes, unruly weather and wars that even the United Nations can’t handle. But it’s nothing compared to what will break loose once the Tribulation begins. It’s like the stage is now being set for that whole seven years. There’s a lot of activity that must take place before the curtain actually rises, and the Tribulation drama is played out. We are seeing the props being gathered, all the advertising, and the stage set. I’ve got a dear friend in Muskogee that every time he writes he says, “Les, just keep teaching prophecy.” But we must also teach the whole picture as it unfolds from Genesis to Revelation. Here in verse 15, we are at the mid-point of the Tribulation. The first 3 1/2 years have been culminated by the events of verses 5-12. Verse 13 and 14 go all the way to the end.

“When ye therefore shall see the abomination of desolation, spoken of by Daniel the prophet, stand in the holy place, (whoso readeth, let him understand:)”

As you see those words, “Daniel the prophet,” and perhaps have read where someone is ridiculing Daniel’s Book of prophecy as a fake, or something that has been inserted by Jews somewhere along the line, you come right back to the Scripture here. Because Jesus said those words, and what more proof would a person need for the validity of Scripture than that. And it’s the same way with Jonah. I know Jonah may be hard for the unbeliever to accept, but Jesus Himself gave proof of it when He said in Matthew 12:40, “For as Jonas was three days and three nights in the whale’s belly: so shall the Son of man be three days and three nights in the heart of the earth.” If Jesus said it, how can we help but believe it. He’s the Author and finisher of this Book. And when He puts His stamp of approval on it, we had better believe it.

Jesus is referring back to Daniel the prophet, and Daniel says that when this individual stands in the holy place, the Tribulation Temple whoso readeth, let him understand. In the past we have had two Temples in Israel, and the third is about to come on the scene even as we teach tonight. The first Temple was built by King Solomon about 960 B.C. Remember King Nebuchadnezzar destroyed that one. Then the second Temple was the one that was rebuilt first by Ezra, as Israel came back from the Babylonian captivity, but this Temple was pretty make-shift. It wasn’t anything like the Temple that had been destroyed because they lacked the resources and manpower to make it beautiful like the first one. Then Herod the Great came along about 50 B.C. He was a rather pompous individual and he loved to build beautiful things. Being embarrassed at Israel’s Temple, he started remodeling and extending the size of it, so it also became a beautiful Temple – the one destroyed in 70 A.D.

The Tribulation Temple, which is still future, will become the third Temple, and as most of you are aware, if you watch current events at all, the Jews are more than ready to rebuild their next Temple. Now this verse we just looked at is one of the proofs that there will be the Temple rebuilt in Jerusalem at some point before the middle of the Tribulation. That is all we know. We don’t know if it will be built before or after the Anti-christ signs the peace treaty with Israel, but we do know the Temple will stand once again and be in operation at the mid-point of the Tribulation. Go back to Daniel Chapter 9 for a moment and tie this event together with Matthew 24. In Daniel Chapter 9 we have the 490 years that Daniel prophesies concerning the Nation of Israel. It begins in verse 24:

“Seventy weeks (490 years) are determined upon thy people (Israel) and upon thy holy city (Jerusalem), to finish the transgression, and to make an end of sins, and to make reconciliation for iniquity (the work of the Cross), and to bring in everlasting righteousness, and to seal up the vision and prophecy, and to anoint the most Holy.” Daniel goes on to explain the breakdown of these time elements.

“And after threescore and two weeks shall Messiah be cut off (now that completed 483 years of the prophecy that was determined in verse 24, which would still leave 7 years still to be fulfilled), but not for himself (He didn’t die because He deserved it, but rather for the sins of the world. Now here comes the prophecy), and the people of the prince that shall come shall destroy the city and the sanctuary;…”

That means that the prince that shall come, the Anti-christ, would come out of the empire that destroyed the Temple and city of Jerusalem in 70 A.D. and we know that was Rome. And that is why the Bible has been looking forward to the end-time when the Revived Roman Empire would once again come to power, and we see that even tonight with the E. C. They already have currency printed for the E. C. with the logo of a woman riding upon a beast as described in Revelation. Isn’t it amazing how an ungodly world, (and Europe certainly is) is falling right into the very format of the Book of Revelation. Now verse 27:

“And he (the Anti-christ) shall confirm the covenant (peace treaty) with many (Israel. Although Israel has signed some peace treaties of late they are not the ones described here. I think they are a forerunner to the main peace treaty, however) for one week:”

Seven years. God’s time-clock has been stopped since the day The Messiah was cut off, or died on the Cross. And for the past 1900 + years the Church Age is being completed. But when the last person is saved during this Church Age, then the Rapture occurs. And then the Anti-christ will be revealed and he signs that seven-year treaty with Israel. The day he signs that treaty the time clock of God kicks into gear again, and the final seven years will start ticking off. Remember a year in Scripture is twelve thirty-day months or 360 days for the year.

“…and in the midst of the week (seven years) he (Anti-christ) shall cause the sacrifice and the oblation to cease (the Jews can offer sacrifices and oblation only at the Temple), and for the overspreading of abominations he shall make it (the Temple) desolate (I think Antiochus, the little Syrian dictator who was just a little pip squeak in history, was a type of “anti-christ.” He offered a hog on the altar and defiled it at one time. I think this Anti-christ will do the very same thing. The hog’s blood was the abomination. And then Daniel goes on to say), even until the consummation, and that determined shall be poured upon the desolate.” Or the desolator, the man Anti-christ.

So this is what Jesus was referring to in Matthew 24:15 That the man Anti-christ will come into the Temple and will defile it. Then He tells the Jew, and this prophecy would be 2000 years ahead.

“Then let them which be in Judaea flee into the mountains: Let him which is on the housetop not come down to take any thing out of his house:”

Time will be very important here, and also remember this is an analogy to the escape out of Egypt. Much of it is a parallel. And just as God protected and provided for Israel then, He’s going to do the same thing for this escaping remnant of Jews at this time in the middle of the Tribulation. This is not the 144,000 we read about in Revelation that will be preaching the Gospel of the Kingdom. This is a cross-section of the society of Israel in the Jerusalem area. Here we are going to have men, women, young women, children, the working class, the retired class and they will be all fleeing from Jerusalem. Looking at verse 17 again we find:

“Let him which is on the house top not come down to take any thing out of his house:”

As I’ve taught this before, these represent the retired people who are well-to-do, who spend a lot of time on the housetop which is common in that part of the world. They probably have a lot of things they’ve collected over the years and would like to take with them, but they’re not going to have time for that.

“Neither let him which is in the field return back to take his clothes.” This is the working class, and here Jesus speaks specifically about agricultural workers. He’ll be lucky to get out with the clothes on his back.

“And woe unto them that are with child, and to them that give suck in those days!” Here we have the young women that are pregnant and the young mothers with children. There is a complete cross-section of people involved with this prophecy.

“But pray ye that you flight be not in the winter, neither on the sabbath day:”

Winters can be tough in Israel, and the Jews, as we have pointed out, will be back under the Law with their Temple worship. And remember on the sabbath day the Jew could only walk so far. Now verse 21:

“For then (at the mid-point) shall be great tribulation (it will be far greater then the first 3 1/2 years), such as was not since the beginning of the world to this time, no, nor ever shall be.”

And all you have to do is reflect back over the history of Israel; they have gone through some very tough times. But none of that can even come close to what will take place during that last 3 1/2 years. And then verse 22:

“And except those days should be shortened (now as I understand the Greek word “shortened,” it means it will end right on schedule otherwise), there should no flesh be saved: but for the elect’s sake those days shall be shortened.” However, we know from Scripture there will be survivors of the Tribulation, and we will try to pick that up in our next lesson. But here in verse 23 when things get tough, people get religious, and Jesus says be careful.

“Then if any man shall say unto you, `Lo, here is Christ,’ or there; believe it not.”

“For there shall arise false Christ’s, and false prophets, and shall shew great signs and wonders (where are they going to get their power? From Satan!); insomuch that, if it were possible, they shall deceive the very elect.” Those who are believers and are still surviving.

“Behold, I have told you before,” And here He reminds them again. This is all for emphasis.

“Wherefore if they shall say unto you, Behold, he (The Messiah) is in the desert; go not forth: behold, he is in the secret chambers; believe it not.”

He won’t be coming from those areas. He will be coming from Heaven at the end of the Tribulation in power and glory. And He will destroy all the nations that have been gathered there around Jerusalem under the power of the Anti-christ, and Christ will stand on the Mount of Olives.

You have Successfully Subscribed!

You have Successfully Subscribed!